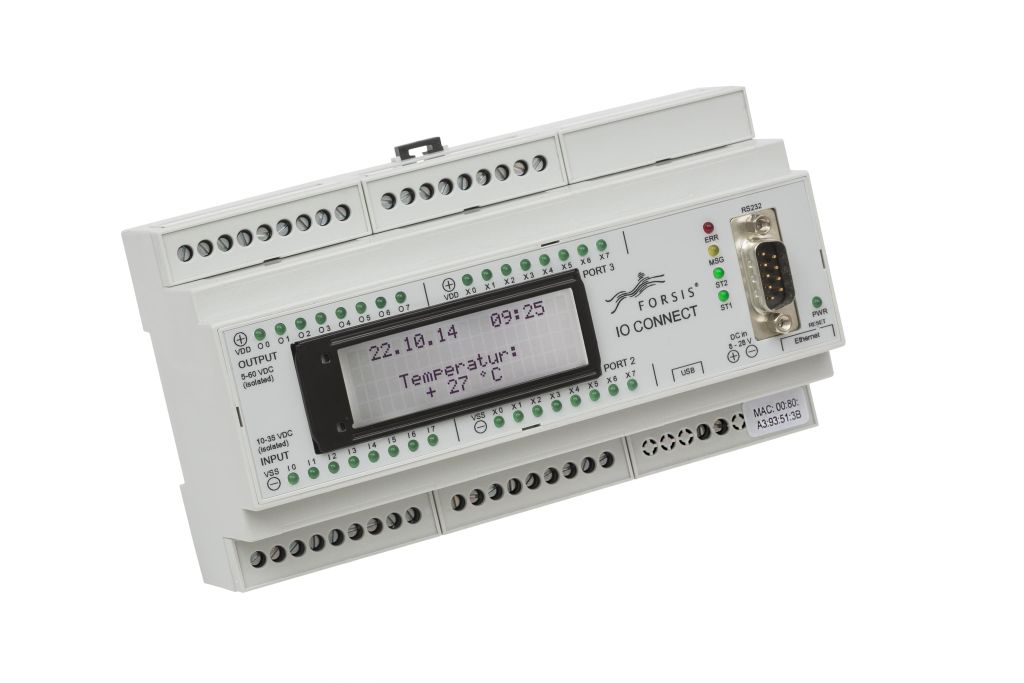 The digital modules from FORSIS - IO CONNECT MINI and BASE

The project of the digital modules for machine data acquisition was launched at FORSIS because a large number of customers were looking for a solution that offers the possibility of acquiring and controlling the signals in a control cabinet or on a machine. This is how the digital modules of the IO CONNECT series were developed.

The decentralized distribution of the machine data acquisition modules is playing an increasingly important role. The focus is on reducing the number of input stations for machine and work groups. But the possibility of direct mounting of the terminal on the data sink, which reduces the cabling effort, also makes the modules attractive. The flexibility and the modular structure when combining terminals for machine data acquisition complete the range of digital modules from FORSIS.

Areas of application and product highlights

The digital DIN rail modules IO CONNECT from FORSIS are designed for direct TCP / IP network connection (Ethernet) and can therefore be integrated directly into your existing company network. Optional parallel or direct communication via USB is possible with the modules of the IO CONNECT BASE and IO CONNECT LCD series, which enables use on mobile workstations. The modules offer a variety of communication and acquisition options that implement direct machine connection. Depending on requirements, RS232, RS422, RS485 and a number of digital inputs with different functions can cover the machine data acquisition (MDE).

Control of actuators or control of individual machine parts is also possible. This can be the activation of the machine by the production manager, or automatic feedback of the machine status via a signal light. The possibilities are limitless here.

In addition to the existing range, FORSIS GmbH also offers accessories and assistance with the dimensioning and integration of your project. Contact us!

Sales
Our sales team will gladly answer your questions! 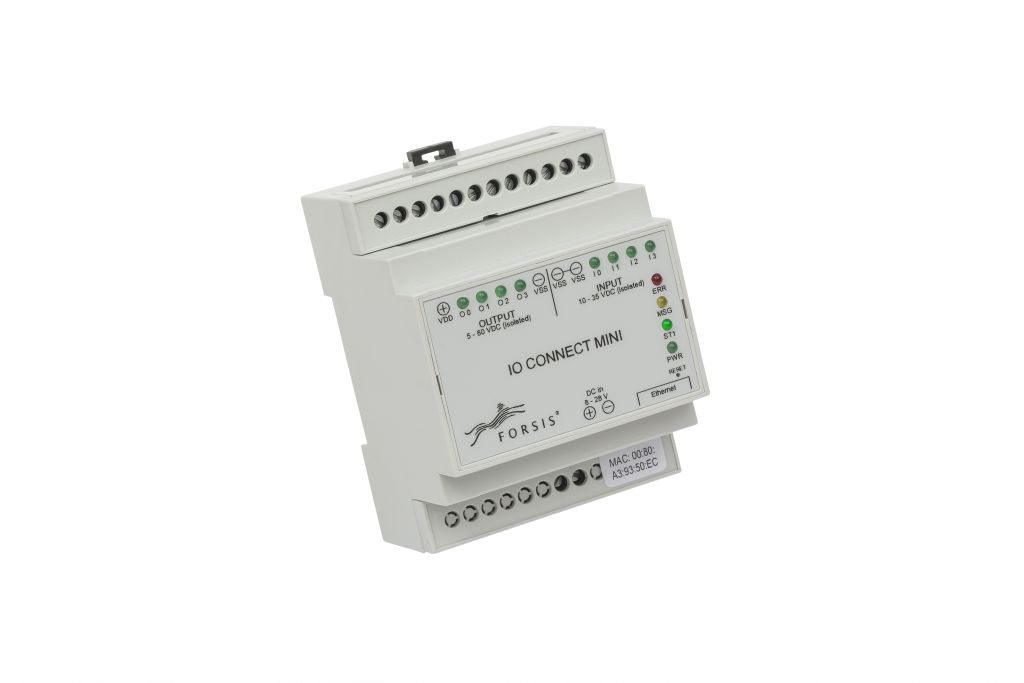 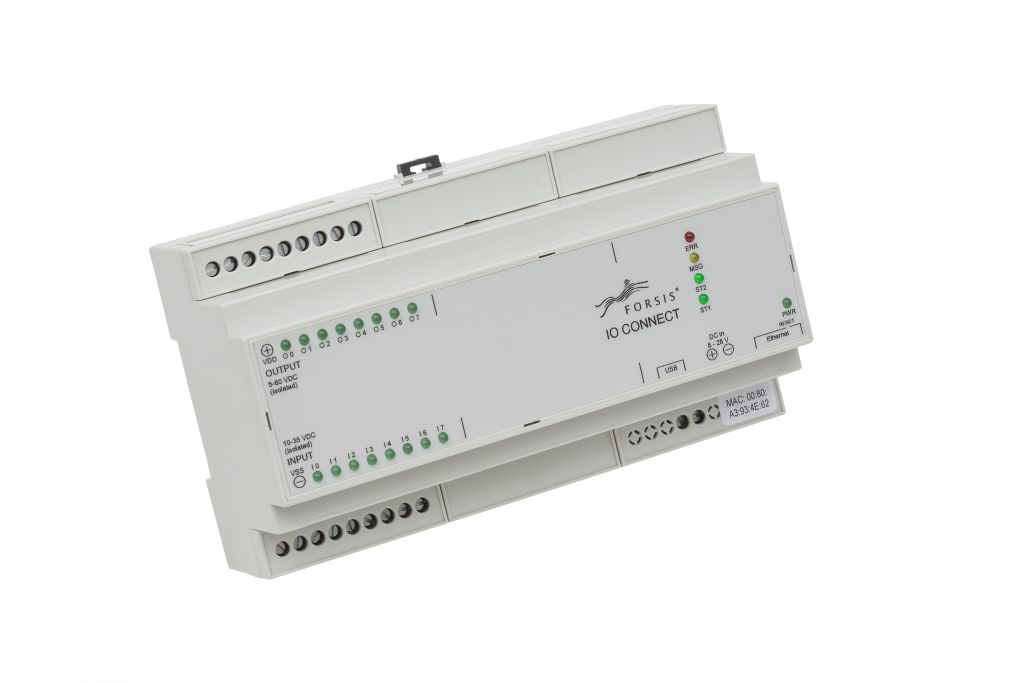 "We will gladly answer your questions" 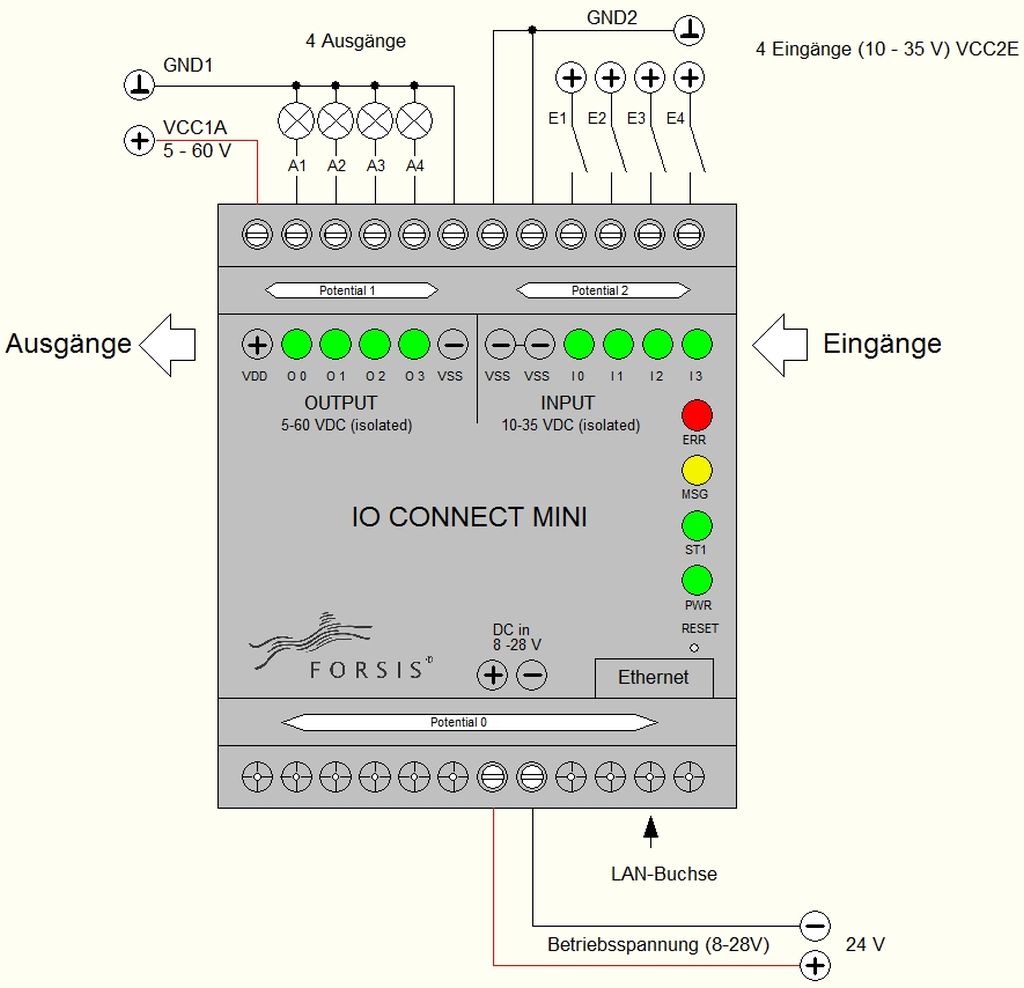 The inputs and outputs of the IO CONNECT MINI and the supply voltage are galvanically isolated from each other.
The inputs can be connected to a machine and the outputs to a PLC without having to establish equipotential bonding.
Only the supply voltage and the interfaces are brought together for technical reasons. 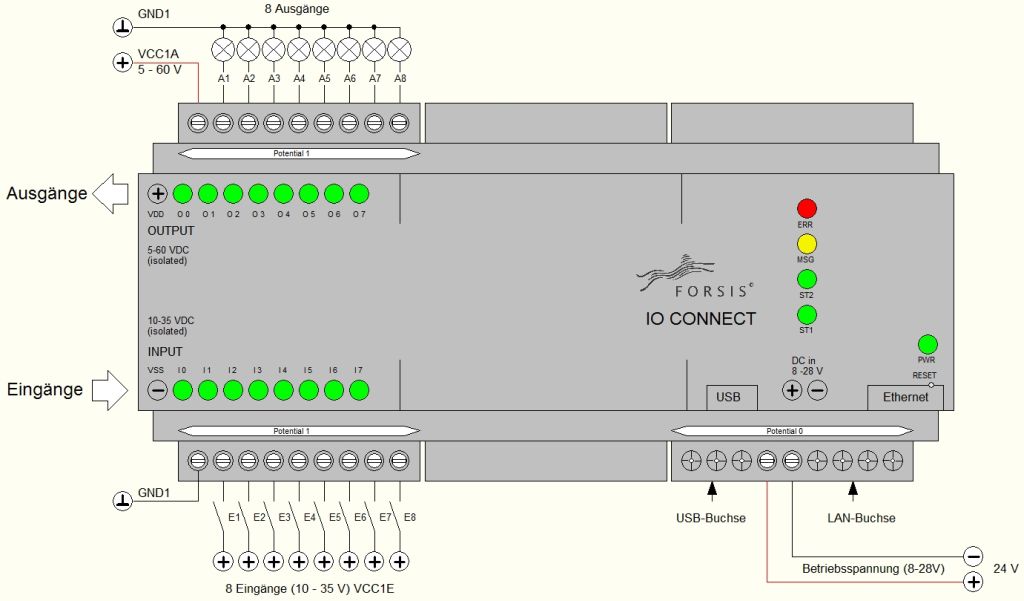 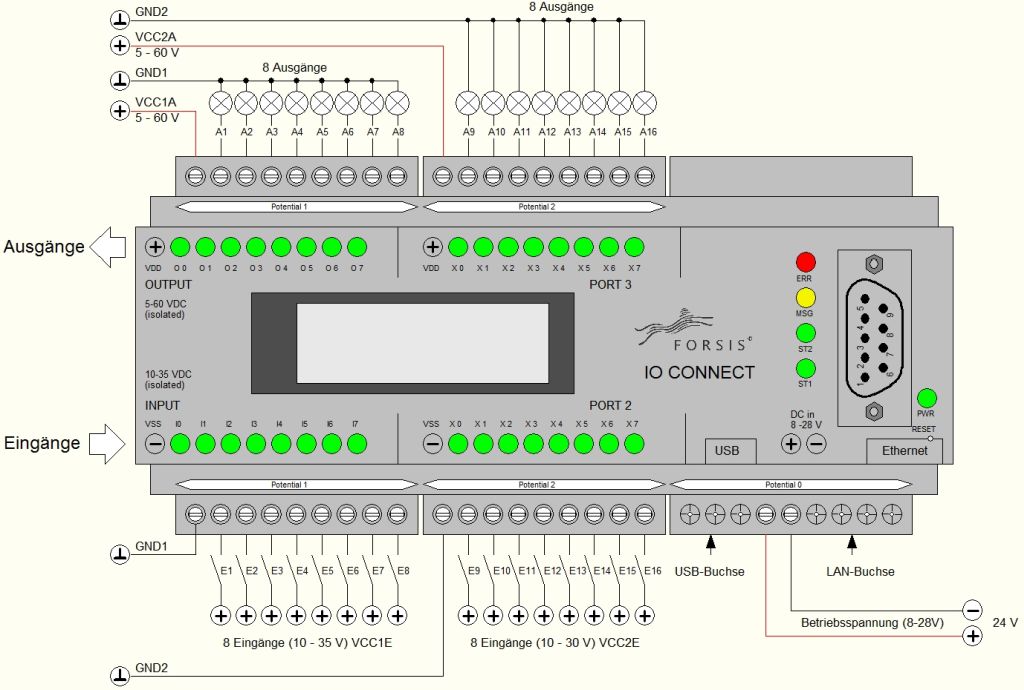 The digital module IO CONNECT LCD offers additional modules for interaction with the user. For example, messages can be output via the software or scrolling displays for statistical information can be displayed.

We would be happy to inform you personally about other functions if required. 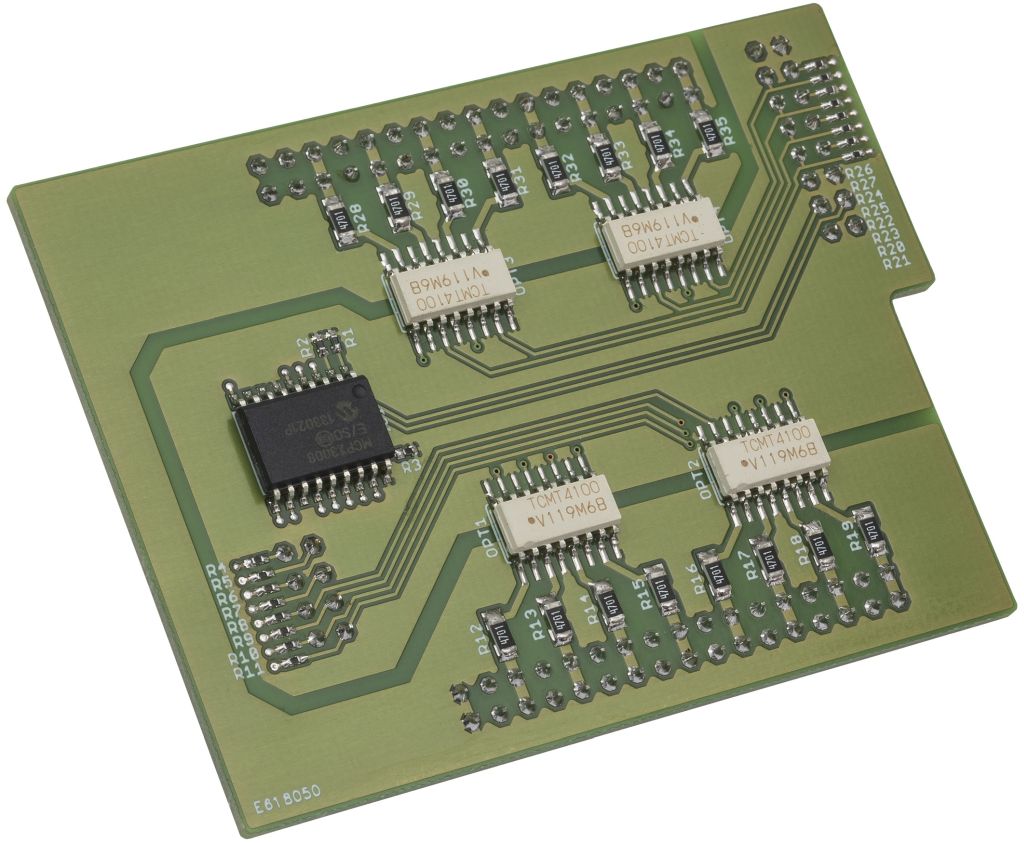 These functions are fully integrated into the familiar programming, no further adjustments are necessary. 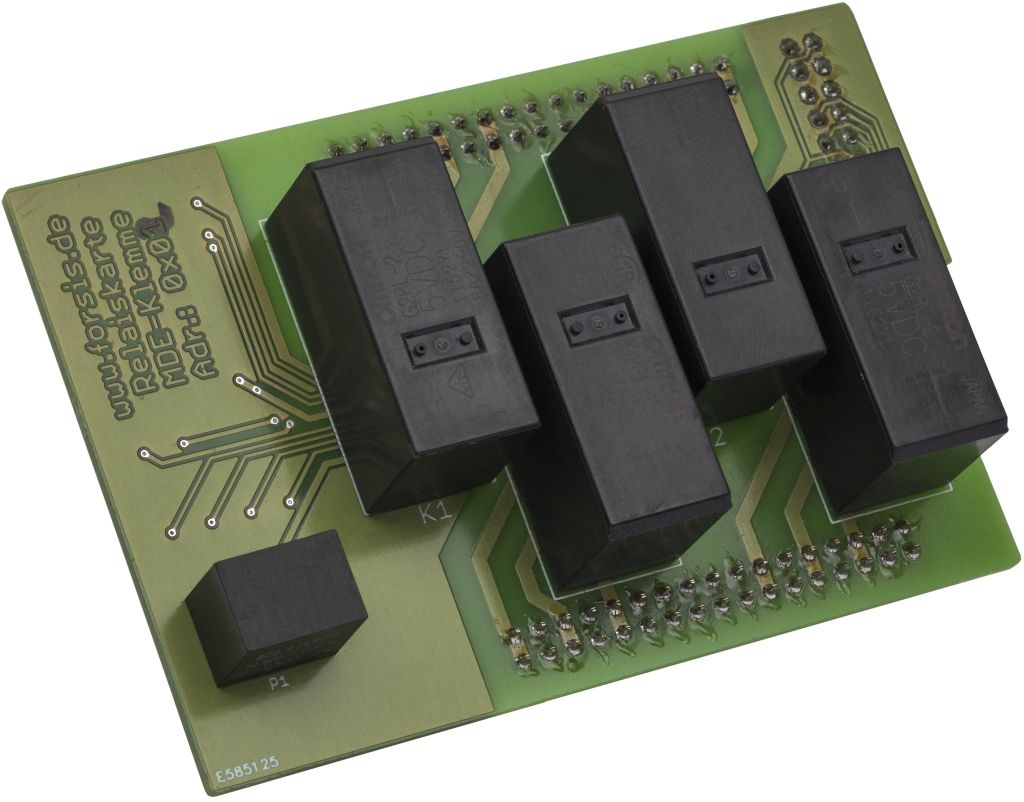 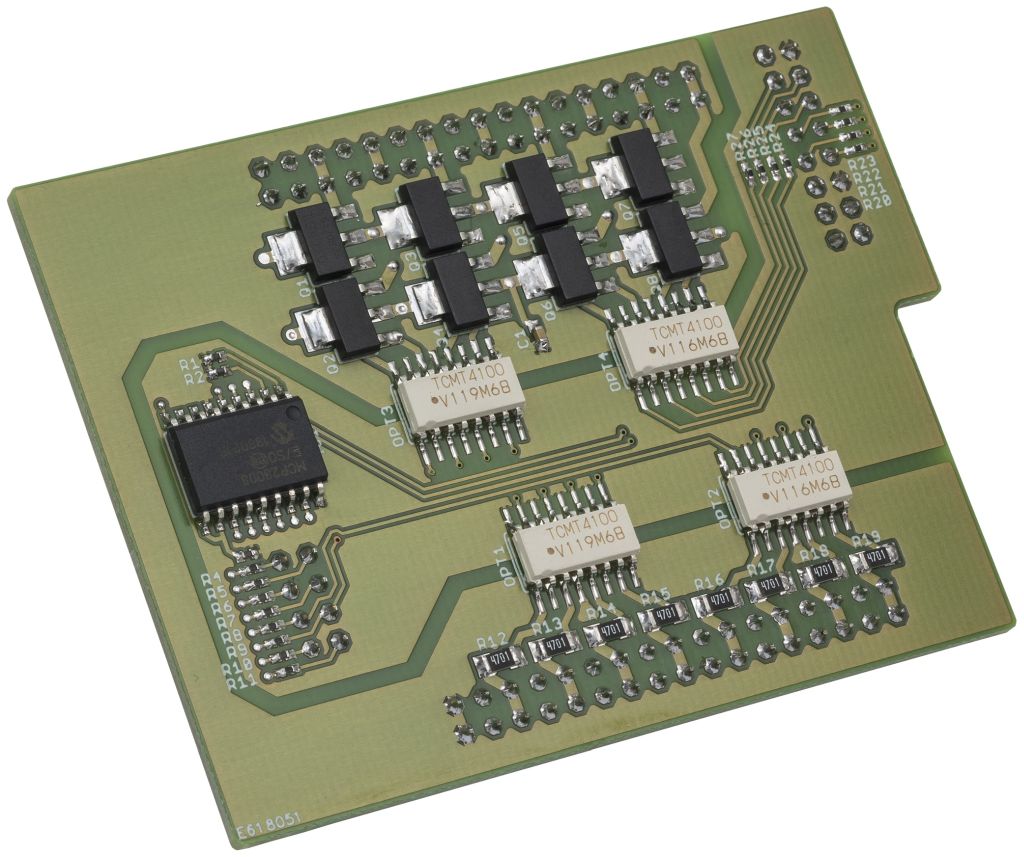 These functions are fully integrated into the familiar programming, no further adjustments are necessary.

The digital inputs of the digital modules of the IO CONNECT series BASE, MINI and LCD are high-active and connected to a common ground. If a voltage is applied to an input, the status is recognized as high (input set). Otherwise the state is recognized as low (input open / on ground). All inputs and their common ground are potential-free in relation to the supply voltage and the interfaces of the IOC module.

The digital outputs of the modules are high-active and connected to a common ground and a common supply voltage. If an output is set, the supply voltage of the IOC is switched through. Otherwise the output is left open.

All input and output states can be queried at any time via TCP / IP or USB. The maximum input frequency and the switching times of the outputs are 100 Hz, which defines a minimum pulse duration of 5 ms.

With the digital modules of the IO CONNECT BASE, MINI and LCD, debouncing of the rising and falling edge can be programmed for each input. The debouncing times can be configured independently for both edges and for each input in 1 ms steps from 0 ms to 65535 ms.

The functions of the time switches of the digital modules are also very extensive. The user has the option of defining up to 32 timers. These can be set very precisely with the year, month, day, hour, minute and second.

With the help of the time switches, outputs can be switched on or off or toggled at defined times. The programmed settings are fixed in the EEPROM so that they still have an effect after a restart.

The digital inputs of the digital modules can record and evaluate pulses in the millisecond range. Different functions for counting the impulses in freely selectable time units can be activated independently for each input (steps in seconds, 32 bits).

The recording of the total number of pulses and counting with start and stop conditions can also be activated independently for each input. When recognizing pulses, you can set whether to react to a falling or a rising edge. If only the current state of the digital inputs is concerned, this can also be called up at any time. With the counters, a distinction is made between a CONSTANT counter and six other configurable counters, which can be configured independently at each input.

The CONSTANT counter is saved in the real-time clock at least once per second and is available again after a restart. The six configurable counters have no memory function and are only available during runtime. These must be reprogrammed after a restart.

Furthermore, the states of outputs can be changed with rising or falling edges. A total of up to 32 "input = output" functions can be programmed. The programmed settings are fixed in the EEPROM so that they still have an effect after a restart. The delay time for this conversion is only in the range of a few milliseconds, but can also be set independently for each pin and for both edges (debouncing).